THE LANGUAGE AND COMMUNICATION RESEARCH CLUSTER IS DELIGHTED TO ANNOUNCE A PRESENTATION BY award-winning dramatist and director and Head of Media Department, James Martin Charlton, on the re-formation of an exhibition into a dramatic text. 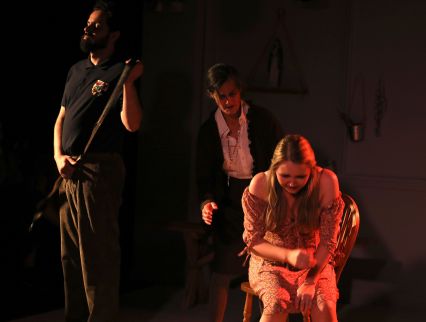 James Martin Charlton’s new play Reformation was premiered in London in June 2019. Inspired by the life of the German Renaissance painter Lucas Cranach the Elder, the play was conceived after the author visited an exhibition featuring the artist’s work for the Hohenzollern electors. This encounter with Cranach’s portraits and mythological scenes inspired a work which explores themes of sexual exploitation, power and patronage. In this seminar, the author explores how work in the static, two dimensional medium of painting can be reformed into drama, a medium which combines action and dialogue and which progresses through time and three-dimensional space. How does a painter of the 16th century inspire a contemporary dramatist? What uses does a writer make of historical research, and when might it be permissible to speculate and imagine beyond the historical record?

James Martin Charlton (writer) is a dramatist, director and academic.

His plays include Fat Souls and Coming Up (Warehouse Theatre, Croydon); ecstasy + Grace (Finborough Theatre); Desires of Frankenstein (Open Air, Regents Park/Pleasance, Edinburgh); The World & his Wife, I Really Must be Getting Off (The White Bear); Coward (Just Some Theatre Co.). He has written two short pieces for The Miniaturists, Fellow Creature and Battis Boy (Arcola Theatre). His recent play Been on the Job Too Long has been produced three times since 2015 (at TheatreN16, the North London Literary Festival, and the Talos Festival of Science Fiction Theatre).

He wrote an adaptation of The Pilgrim’s Progress under commission by the RSC, and his biographical play about William Blake, Divine Vision, was performed at Swedenborg Hall.

He has directed a number of contemporary plays, including Gob, Bumps (King’s Head), Plastic Zion (White Bear), Histrionics (Underbelly, Edinburgh). He has directed three site-specific production of plays by James Kenworth: Revolution Farm (after Orwell) played at Newham City Farm in 2014; A Splotch of Red: Keir Hardie in West Ham toured east London libraries and community centres in 2016; Alice in Canning Town was produced at Arc in the Park in summer 2019.

He has written and directed two short films, Apeth (2007) and Academic (2011). He wrote screenplays for the shorts Emotional Tribunal and Best Shot. He recently filmed his play Fellow Creature for 360° video, as part research project into the medium which resulted in the 2019 article ‘VR and the dramatic theatre: are they fellow creatures?’ in the peer-reviewed International Journal of Performance Arts and Digital Media.

He has lectured at UEL and Birkbeck and is currently Head of Department of Media at Middlesex University.

The Language & Communication research cluster is excited to announce the fantastic line-up of presenters for our 2019-20 research seminars, at our HENDON CAMPUS. The seminars feature world-leading authorities and acclaimed practitioners who discuss their work on language, discourse and communication, literature, creative writing, media and cultural studies. Hope to see you all there!

Check back here for additional listings.