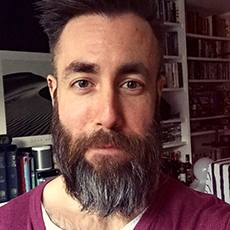 In this talk Matt will explore what an “ambient” literature might be, what it might deploy and be sensitive to, and how it might help us to ask new questions about readers, places of reading and interacting, embodied and extended cognition, and the effects of the materiality of text, particularly in a digital/post-digital age. Examples of literature (and other artworks) that we might want to describe as “ambient” have existed for a long time, but a few months into an AHRC project focussed on ambient literary works of the now and near future we are thinking again about the politics and practices of ambience and what might make ambient works of particular interest in our current moment.

Dr. Matt Hayler is a lecturer in post-1980 literature at the University of Birmingham specialising in bringing together insights from the digital and cognitive humanities with (post)phenomenology and object-oriented philosophy in order to better understand the entanglement of humans and their technological artefacts. His work tends to use e-reading, contemporary experimental literature, and transhuman body modification as case studies for exploring how cognition, knowledge, and materiality become intertwined across human and non-human actors.

Matt spent two years as Network Coordinator for the AHRC-funded Cognitive Futures in the Humanities research network and now acts as a UK Management Committee Member and Working Group Leader for the COST-funded European E-READ research network. He is also CO-I on the AHRC-funded Ambient Literature project and has worked with the Royal Shakespeare company on developing a digital “Theatre Book” with support from the AHRC’s REACT programme. His first book, Challenging the Phenomena of Technology, came out in 2015 and he has since co-edited two volumes on Research Methods for the Digital Humanities alongside Professor Gabriele Griffin, Research Methods for Reading Digital Data in the Digital Humanities and Research Methods for Creating and Curating Data in the Digital Humanities (EUP 2016). He tweets – @cryurchin